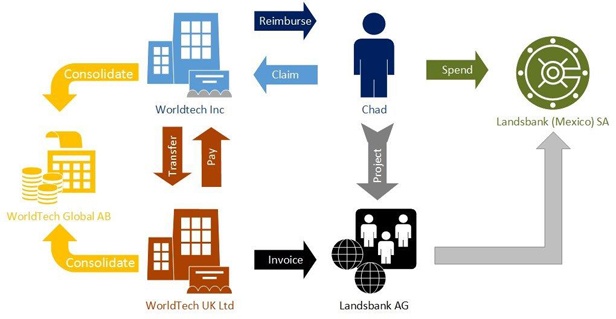 “How many currencies do you support on an expense record?” is an odd question, however we get asked it now and again.

The easy answer is three:

And that works fine for single legal-entity customers unless the employee works in another country and needs reimbursement in a fourth currency.

But, HarmonyPSA supports multiple legal entities in a single instance and in doing so, it also supports the automation of transfer pricing between legal entities.  For this model, you (potentially) need to support up to a staggering six currencies on a single expense claim.

Let’s talk through this scenario (which is illustrated above)...

Worldtech Inc is a US software company based in Chicago that does its local accounting in US$ (currency 1, light blue).  Chad is an implementation consultant who works for Worldtech Inc but actually lives in Canada and so wants to be paid in Canadian $ (currency 2, dark blue).

Now Worldtech Inc is part of an international group based in Sweden.  Worldtech Global AB uses Swedish Krone (currency 3, gold) as a group consolidation currency.  The group has a UK subsidiary, Worldtech UK Ltd, based in London that does its local accounting in Sterling (that’s currency 4, dark red).

Worldtech UK wins a contract to deploy a global system to a Landsbank AG which insist on billing in Euros (currency 5, black).  They need an implementation consultant for the bank’s Mexico subsidiary (Landsbank (Mexico) SA) and reach out to Worldtech Inc who suggest Chad goes down to do the work.

Chad travels to Mexico and claims his expenses in Mexican Pesos (currency 6, olive).  He books these project expenses on Worldtech Inc’s company view in Harmony, but directly against Worldtech UK Ltd’s project with the German Bank (projects are global in Harmony).  Even though Chad doesn’t work for the UK subsidiary, they can directly bill his expenses to the German bank in Euros, while Harmony creates the transfer pricing invoice in Sterling between the US and the UK subsidiaries.  Harmony’s group consolidation currency reports both these transactions in SEK which (unless a TP add-on has been included) cancel out.

Implausible?  Well, no, though we’ll admit it is rare.  We had this scenario recently and were pleased to answer “yes, it does all that...”

The key to functional completion is being able to support rare events like this without manual intervention.  When we say we are multi-currency, we mean it in the fullest sense, we really do have this problem sorted.

If you think you need to spend $ms on some enterprise ERP tool to run your multi-country group, call us, the solution may well be far easier (and cheaper) than you think.

Worldtech and Landsbank are invented, no relationship exists between this blog post and any real companies